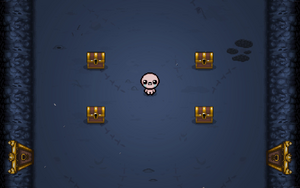 ???, referred to as Blue Womb or Dead Womb in the OST, is a chapter added in The Binding of Isaac: Afterbirth. It is unlocked by defeating Mom's Heart for the 10th time.

It is accessed by defeating Mom's Heart or It Lives! within 30 minutes. Leaving and re-entering the Boss Room after the timer has reached 30 minutes will make the entrance to ??? disappear.
If the player is fast enough, both Boss Rush and ??? can be completed in a single run. The boss of the floor is always Hush.

It contains the following:

It is advised to only enter ??? with very powerful items and/or a set of good dodging skills because Hush ranks amongst the most difficult bosses of the entire game.

After Hush is defeated, one of two things will happen:

The ???'s music is called Mater Prope or Nativitate. These names are in Latin and translate to "Almost Mother" and "Birth" respectively.

The tracks that play during the battle against Hush are called Ascension (the ??? boss fight music; played during Hush's first phase, which is similar to the ??? boss) and Morituros (during the second phase).

Bug! Attempting to open the door leading to Hush's room while holding a Golden Key will cause Isaac to walk through the door without opening it, immediately beginning the Hush fight.