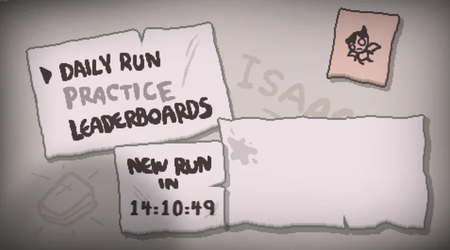 The daily challenge (or daily runs) is a unique run generated every day. Daily Challenges were introduced in The Binding of Isaac: Afterbirth. Daily challenges start the player off with a specific character, seed, end-stage, and set of starting items. The player is scored and placed on a global leaderboard after ending the run. The run can only be played once per day, but an unscored practice run is unlocked afterward, which is identical to the Daily Run but can be played multiple times. Unlike regular runs, exiting the Daily Run will end it and disallow further progress.

Score plays a bigger role in daily challenges, as the player is ranked in the leaderboards by their score. Having a strategy that accounts for how the score is handled is important in achieving an optimal score.

The final score is divided into several bonuses and a few penalties:

Below is a list of all the starting points for each character.