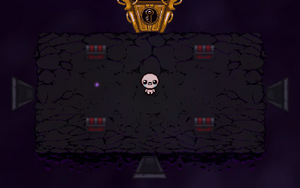 The Dark Room is one of the game's three final stages, alongside its counterpart,

The Chest, as well as

The Void. The Dark Room is unlocked by defeating Satan 5 times, after which it can be accessed by touching the chest dropped by Satan with

The Negative equipped. Entrance to the Dark Room can also be achieved via the I AM ERROR room on Sheol, even without

The Negative as well as through the Black Market on

Sheol and through a trapdoor spawned by a button. After completing this level or The Chest for the first time, the Dark Room will always contain a large golden door in the first room, which can be unlocked with either the Key Pieces (combination of

Get out of Jail Free Card or

The Dark Room can also be accessed by repeatedly using a Sacrifice Room. After Uriel and Gabriel are killed, continuing to use the Sacrifice Room will teleport Isaac to the Dark Room, regardless of what floor he was previously on.

The Dark Room is home to the Grave Room which will contain a Dirt Patch, which can be dug up using

Mom's Shovel. Doing so for the first time will unlock The Forgotten. On subsequent runs, multiple Dirt Patches can be found, and digging them up using

We Need to Go Deeper!,

Ehwaz, or Mom's Shovel will spawn a random type of chest.

Sheol before it, the Dark Room consists of only one floor. In the Dark Room, it is not possible to bomb doors open to skip rooms. The Dark Room's rooms are mainly filled with bosses and mini-bosses. The boss of the floor is always The Lamb.

The first room the player spawn in will automatically contain 4 Red Chests. Red Chests will also drop frequently upon clearing a room, regardless of whether the player has the Left Hand trinket or not. Additionally, all normal and Locked Chests spawned in the Dark Room will always contain Treasure Room items.

The music for the Dark Room is titled Devoid, which means “empty”.