Health represents the amount of damage the player can take before dying. There are four different types of health in the game, each with their own pickups. The health bar is the visual representation of a player's health on the HUD.

Heart containers, or red hearts, are the main form of health for the majority of characters. If the player has only red hearts, the containers will be unfilled as damage is taken (but the containers themselves remain). Empty heart Containers can be refilled with red heart pickups. If Isaac takes a heart that would heal him for more than his current maximum health (for example, taking a red heart when he is only missing half a red heart worth of health), the excessive health will be wasted. The number of heart containers can be increased with multiple items or Health Up pills or decreased with items, Health Down pills, having another player join a game as a baby, or trading them away in a Devil Room or at an underground Black Market.

Soul hearts are blue hearts that are appended to the end of the health bar. Unlike red hearts, soul hearts do not have containers, so once they're depleted, new ones must replace them. If Isaac has red hearts and half a soul heart, taking a full heart of damage will not remove any red hearts. Losing soul hearts does not count as damage for Devil Room or Angel Room appearance chances, but does count as damage taken for the achievements Basement Boy, Spelunker Boy, Dark Boy, Mama's Boy, and Dead Boy.

Black hearts are similar to soul hearts in that they are appended to the end of the health bar, are not permanent, and that losing them does not count as damage for Devil or Angel Room chances. However, when a black heart is depleted, The Necronomicon's effect is triggered, damaging all enemies in the current room. If Isaac is at his HP cap and any of his hearts are soul hearts, the black heart will replace the rightmost soul heart when picked up.

Gold hearts are unlocked by completing the XXXXXXXXL challenge. Once picked up, the gold heart surrounds Isaac's rightmost heart. The Gold Heart does not prevent damage, but when the heart that the gold heart surrounds is depleted, several coins will spawn and enemies will be changed to gold statues, similar to Midas Touch effect. gold hearts can be 'pushed off-screen' if you have twelve hearts, at least one being a soul, black, or bone heart, and pick up a health up. Coins will still appear if this happens. Losing many hearts at once — for example, by picking up a Dead Cat or using a Hematemesis pill — will correspondingly trigger the gold heart effect many times at once and shower you with coins.

Coin hearts are a special heart type used exclusively by Keeper. Coin hearts always take double damage. They can only be replenished by picking up Coins, which will consume one cent from the coin pickup for each heart restored. They are treated as red hearts for most items and can be sold in Devil Deals or Black Markets. See Keeper #Notes for more information.

Bone hearts are special heart containers unlocked alongside The Forgotten, and are appended to the end of the health bar. Empty containers can be filled with red hearts and filled containers take three hits to deplete (or two hits against sources that deal a full heart of damage), but disappear permanently upon depleting. Bone hearts, empty or full, are considered red hearts by most items but cannot be used for Devil Deals or Black Markets. Bone hearts will be emptied when picking up items that remove all red hearts, such as

Brittle Bones. Losing bone hearts or the red hearts contained within will not affect the chance to find a Devil Room or Angel Room, with the exception of The Forgotten who receives a penalty for a bone heart breaking. Acquiring an empty red heart container while you have a filled bone heart will fill the new heart and empty the bone heart. Blue Baby can pick up bone hearts, but cannot fill them with red hearts.

Bug! Gold hearts will be consumed if a self-damaging item is used to remove a red heart while the gold heart is surrounding a Soul/Black Heart. 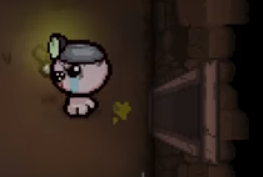