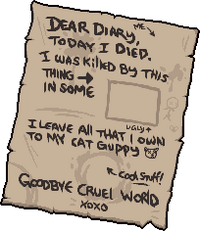 Isaac's Last Will is the Game Over screen of the game. It is shown whenever Isaac is definitively dead; that is, he doesn't have any more hearts or extra lives. It follows the following format:

If the Missing Poster trinket is owned at the moment of death, a different version of the Last Will, featuring a jigsaw puzzle piece, will be shown.