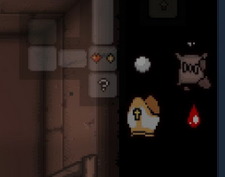 Bug! After defeating an Angel spawned in a Super Secret Room, the music will not return to the floor's regular music.

Bug! Teleporting to the Super Secret Room in Greed or Greedier Mode, when the room is generated behind a still-locked Treasure Room, will trap the player inside.