Please take a moment to fill out this survey on your gaming habits!

The Binding of Isaac: Repentance (Pre-Release)

The following information/confirmations of The Binding of Isaac: Repentance, an upcoming DLC set to be released in Q2/Q3 of 2020,[1] has been collected:

A "title reveal" for a new expansion was released by Nicalis on Youtube.

The trailer revealed the title of the expansion and its logo - strikingly similar to that of The Binding of Isaac: Antibirth, a fan-made expansion of the game that received critical acclaim from the community but despite popular demand seemed to have little chance of being brought to the official game. Additionally, it was announced on Twitter that Repentance would be available for play at the PAX West 2018 Convention.

The demo version of Repentance playable at PAX confirmed suspicions that the expansion would indeed be a port of Antibirth. Original content from the mod that led to this conclusion as well as brand new content in Repentance that was discovered in the demo included:

Tyrone Rodriguez posted a tweet with "#IsaacRepentanceDev" hashtag of a gif showing off a new item, as well as new visual shaders in the Burning Basement.

Tyrone Rodriguez posted a tweet with the "#IsaacRepentanceDev" hashtag showing a new gif.

This gif shows Apollyon in Downpour with Curse of Darkness active. Some noticeable changes include:

Tyrone Rodriguez posted a tweet with the "#IsaacRepentanceDev" hashtag showing a new gif of Lilith in Burning Basement fighting Baby Plum, a boss from the Antibirth mod.

Tyrone Rodriguez posted a tweet with the "#IsaacRepentanceDev" hashtag showing a new gif.

This gif shows Cain in Downpour firing a total of 2 large tears in the shape of fists. This gif reveals:

Tyrone Rodriguez posted a tweet with the "#IsaacRepentanceDev" hashtag, this time showing a clear gif of Clog on the boss title screen.

Edmund McMillen posted a couple of status report tweets where he announced Antibirth content and the new paths are being currently ported and polished, and that new content for the DLC is planned once that task is complete.

Edmund McMillen made a tweet response, confirming that online co-op won't be added to the game.

Edmund McMillen made a tweet about the status of Repentance and his other projects.

Tyrone Rodriguez posted another tweet with the "#IsaacRepentanceDev" hashtag showing a new gif.

This gif appears to show Eve in Dross, attacking some of the new enemies.

Edmund McMillen posted a status report tweet talking about the first expected release date of Repentance," the first half of next year".

Edmund McMillen posts an image on Twitter that is quickly deleted. 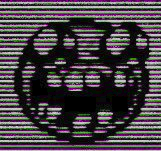 In a Twitter Q&A, Edmund McMillen confirmed that The Witness will be in the game, although it'll probably have a name change. Two returning characters from The Binding of Isaac: Antibirth, Bethany and Jacob & Esau, are most likely being added into the game. Additionally, Edmund confirmed that true local co-op could be added in as well. Finally, Edmund clarifies while that a couple of redundant items got cut most of the changes to items are just edits.

Edmund McMillen confirmed in another AMA that cut content from Antibirth will not be included in Repentance, but that unfinished content may still be finished and included.

Edmund McMillen posted a tweet once again reconfirming that the DLC would be delayed, while also including a grayscale picture of what appears to be Isaac fighting some monster (which is later revealed to be Singe) in The Basement.

Tyrone Rodriguez posted a tweet with the "#Isaacrepentancedev" hashtag, showing a new gif.

This appears to show Magdalene in the Mines floor from Antibirth. Some noticeable changes in this gif include: 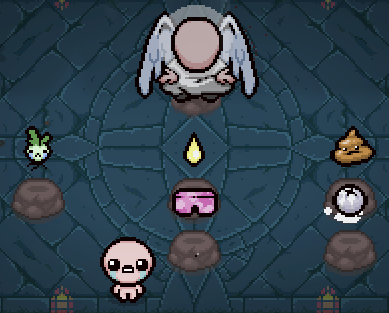 Though in the format of a meme, this screenshot showcases shadows on item pedestals, a returning feature from Flash.

Edmund McMillen responds to a tweet in an AMA about rebalancing in Greedier Mode.

Edmund McMillen responds to a tweet saying that Repentance will be present at PAX, later clarifying in another tweet that he means the PAX that will be held in August.

Edmund McMillen tweets that the team is aiming to release Repentance sometime this year, with more teases to be released after Bum-bo. He also states in another tweet that Jacob's Ladder from Antibirth will be renamed to avoid naming conflicts with the already existing

This shows Isaac in Scarred Womb. Some noticeable changes in this gif include:

Edmund McMillen posted a status update tweet about Bum-Bo and Repentance's expected release times, and about other games that he is developing. This twitter post states that Repentance is expected to be released late Q4 of 2019.

This shows Isaac in Flooded Caves in a fight with Big Horn. Some noticeable changes in this gif include:

Edmund McMillen had a twitter Q&A where he revealed that Edith, the unused Antibirth character, would not be in Repentance [1]. Other details revealed include possible respriting for bosses [2], changes to bosses and enemies [3], and that Antibirth characters will most likely have gameplay changes [4].

This appears to show Judas in Dank Depths. Some noticeable changes in this gif include:

Edmund McMillen also had a Twitter Q&A where he revealed that some Four Souls enemies may get added. He also revealed that Delirium and The Void will likely receive some minor tweaks [5]. The Red Key from Antibirth may be added to Repentance [6].

Edmund McMillen had a twitter Q&A where he revealed that Repentance would include Hornfel, and a new boss named Singe.

Tyrone Rodriguez posted a tweet announcing that Repentance would be at PAX West. He also announced that they will probably be doing a live stream of the demo with Kilburn. In this tweet, he also shows a new gif.

This appears to show Magdalene in The Catacombs fighting The Wretched. Some noticeable changes in this gif include:

Edmund McMillen posted a a tweet clarifying that redundant Antibirth items will be changed rather than removed.

PAX West 2019 begins and Nicalis showcases a new demo for The Binding of Isaac: Repentance. A couple of photos were taken by players there. 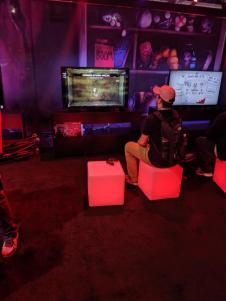 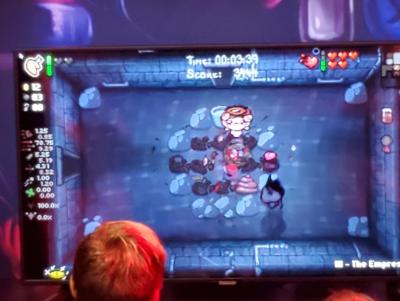 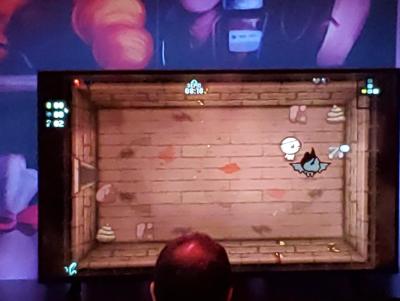 Tyrone Rodriguez hosted a livestream on Twitch, showing the PAX demo of Repentance. Following features could be seen during the stream:

Additionally, another PAX video has been posted to the internet, featuring:

Finally, Edmund had reposted the art image for the Binding of Isaac: Repentance that Tyrone had posted earlier, implying that it'll indeed be used as the cover.

At the second day of PAX West, the following information has been collected:

During the third day of PAX West, someone on Reddit uploaded this post of images, showing a few more new features:

Additionally, the PAX user who uploaded photos from August 31st and September 1st uploaded a series of videos showing new features of the PAX demo:

Finally, the user who had previously uploaded a bunch of footage at PAX posted brief footage of the Tuff Twins at the Mines.

Tyrone hosted a 3rd periscope stream showed a new Boom Fly variant, which can be seen in the Ashpit, as well as a new angel room item, Genesis.

A Discord user posts this image showcasing a new unknown enemy in Ashpit.

The same Discord user posts two more videos, showcasing both Greedier Mode and a bit more of the Ashpit. In the videos, a couple of new changes and features are revealed.

This depicts Isaac with Brimstone fighting against Fistula in The Caves. Details from the gif include:

Edmund McMillen posted a tweet confirming Repentance has been delayed to 2020.

Details from the gif include:

Details from the gif include:

In a Twitter Q&A, Edmund McMillen briefly answered a few questions by Twitter users, regarding features for Repentance.

Edmund Mcmillen created another brief Q&A, answering a question about Repentance in the process:

Edmund created another AMA, answering more questions about the features of the upcoming DLC:

Edmund McMillen posted a tweet about the status of his upcoming games. Here, he posted an image of Bethany in the Basement, who by default holds Book Of Virtues. 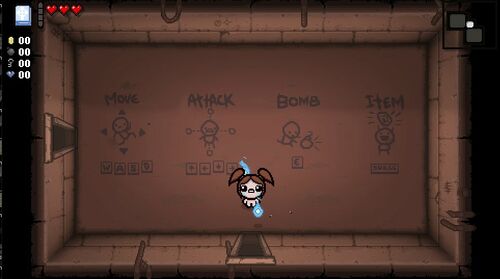 It appears that the number of charges for the Book of Virtues was nerfed from 2 charges in its original appearance (Antibirth) to 4 charges in this DLC.

Edmund McMillen responded to a fan on Twitter asking if Repentance will be released on the Nintendo Switch, saying "Don't know". This is contradictory to earlier reports saying Repentance would be released exclusively on the Switch and PC.

Edmund McMillen posted a tweet about the continued development of his card and video games. One of the images he posted was an image of Jacob & Esau, who are both dead as a result of Jacob running out of health from the spike in the Sacrifice Room despite Esau having one red heart left (this feature was already in Antibirth). It also shows a Dross Sacrifice Room. 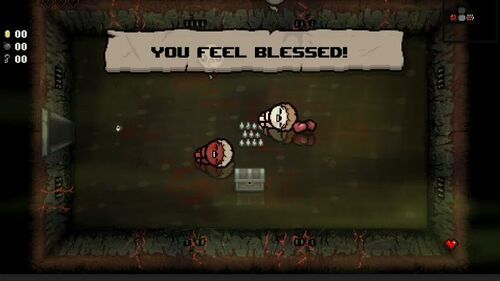 New changes that were seen in this gif include:

Tyrone Rodriguez posted a new gif on Twitter of footage for this DLC. Here, Isaac can be seen fighting Isaac (Boss) in the Cathedral, as per the boss's usual spot.

New details from the gif include:

For the first time since Repentance’s announcement, Kilburn posted a gif on Twitter, showcasing some of Repentance’s new significant synergy changes.

The new changes showcased in the gif include:

Head of the Keeper looking like the brimstone lasers coming from the doors in the Ultra Greedier boss fight could happen, saying "Damn right it can".

Kilburn responded to a fan on Twitter asking if some "shadow hits" from Delirium would be fixed, saying that it will be fixed and that the boss fight will be revamped to be more fair and less confusing.

Telekinesis, alongside many other minor changes.

The changes shown in the gif include: 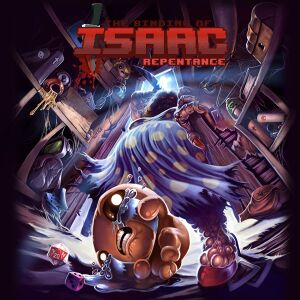 Edmund states on Twitter that while the planned release was at the end of summer it will likely be pushed back due to the ongoing Covid-19 pandemic.

He also talks about stuff that needs to be worked on- which include some bosses, items, cut scenes, and "bonus things".

Additionally, he posted a picture of what seems to be the final cover art.